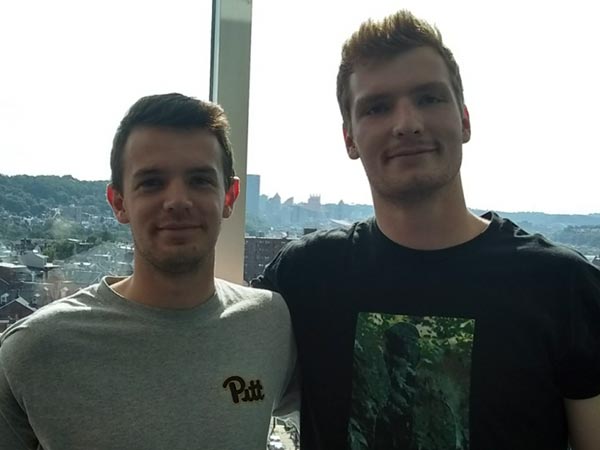 Tim Craine (pictured left) worked under the mentorship of Dr. Corinna Bondi on traumatic brain injury while Marcus Hook worked under the mentorship of Dr. Mio Manole studying cardiac arrest. Tim said his experience in Pittsburgh at the Safar Center was very rewarding. As a member of the Bondi Lab, he “learned an arsenal of behavioral and molecular techniques” and “the ability to problem solve under pressure.” Tim commented that the experience that he valued the most was “being invited to give an oral presentation at the Neurotrauma 2018 conference in Toronto, which showed that all the hard work that the lab had done, payed off.” He said that there were few differences between the lab culture of the UK and the US, but he observed that American labs tend to work over more holidays and weekends! Weekend work notwithstanding, Tim’s time at the Safar Center was a great experience and he was impressed by how involved the senior faculty of the Safar Center were with all the trainees. He said he “felt greatly supported by all those in the center.” Once he returns to the UK, Tim will continue to study for Bachelor of Science degree in Biochemistry, after which he would like to either continue doing research, or enter medicine once he graduates.

Marcus Hook (pictured right) had just completed his second year of an undergraduate biomedical degree before coming to Pittsburgh to do his placement year with Dr. Manole. He was grateful for the amount of responsibility that he had as an undergraduate researcher. He felt that he quickly became a valued and important member of the Manole Lab. Marcus said that “managing a project taught me a lot about organization and planning ahead.…and I learned a load of different techniques (tissue cutting, staining, imaging, sacrificing, behavior) which I’m sure may be useful.” His favorite project was “an environmental enrichment study on cardiac arrest in immature and developing rats.” Marcus also had the opportunity to attend both the 2017 Society of Neuroscience conference in Washington DC, and the 2018 National Neurotrauma Conference, which took place in Toronto, Canada. Marcus said that working with the faculty and lab techs at the Safar Center was a wonderful experience, and offered up a “big thanks to LeeAnn, Jeff, Keri, Jeremy, Jason, Vince, Henry, and Drs. Carlson, Bondi and Kline for teaching me everything and putting up with my endless questions. Everyone was super nice and helpful!” Upon his return to the UK, Marcus will finish his BS in Biomedicine, and plans to either pursue a medical degree, or a PhD. Please join the Safar Center in wishing both Tim and Marcus every success in their future research endeavors! Cheerio!