After 18 highly productive years at the University of Pittsburgh, Safar Center research scientist Dr. Lina Du retired at the end of January. 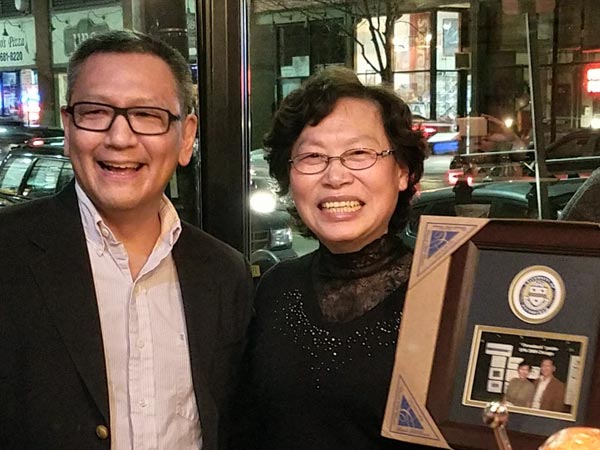 Dr. Du (pictured right) obtained her MD from Shanghai Medial College of Fudan University, and thereafter worked at the State Key Laboratory of Medical Neurobiology at the same university. In 1998, Dr. Du came to the United States. After a year of working at the National Institute of Environmental Health science (NIEHS), Dr. Du came to work at the University of Pittsburgh, first in the Department of Transplantation, and, a year later, for Dr. Robert Clark at the Safar Center. Dr. Du said of her work for Dr. Clark (pictured left) at the Safar Center: “I loved being a scientist in a highly rated learning environmental with a supportive supervisor. The way we worked kept me learning and improving my scientific knowledge for the different challenges posed by each of our scientific research projects.” Dr. Du stated that her favorite research project was studying the sexual difference in brain development, and all other challenging projects that came her way. In her retirement, Lina says she plans on travelling the world, and spending more time with her grandchildren.

Safar Center Director Dr. Kochanek stated that “Dr. Du has contributed some extremely high impact reports, most notably in the areas of the impact of innate gender differences on neuronal death, and on the molecular biology of autophagy in neurons. Her ground breaking in vitro studies on the impact of gender on neuronal death pathways published in the Journal of Biological Chemistry has been cited nearly 100 times, and was featured a number of years ago on the Nature website. Lina has been a great collaborator and colleague of many of the investigators in our Center.”