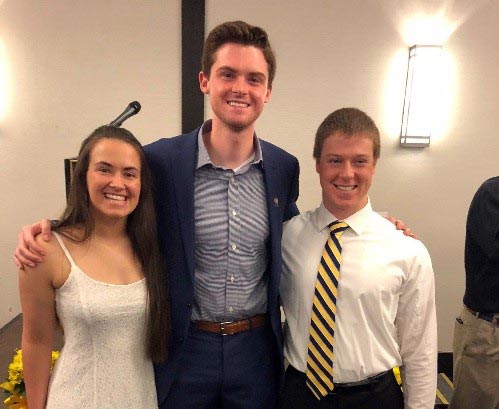 Peter Niesman was the recipient of the James E. Bradler Jr. Award for Excellence in Undergraduate Neuroscience Research, which is the highest honor bestowed to an undergraduate researcher in the Department of Neuroscience. Peter will attend graduate school at Yale this Fall.

Ian received a competitive US Army scholarship to fund his medical school studies at the University of Buffalo School of Medicine via the F. Edward Hébert Armed Forces Health Professions Program.

Melissa received one of six Neuroscience Research Excellence awards and will work with Dr. Mioara Manole during her gap year before applying to MD/PHD programs.

Other graduates from the Bondi lab include Lindsay Kutash and Nima Patel, and those from the Kline lab include Jody Wellcome, Isabel Bleimeister, and Deaven Berry. Lindsay will work with Dr. Bondi during her gap year while applying to graduate schools and Nima will commence a MS degree in Biomedical Sciences at Geisinger Commonwealth School of Medicine. Isabel, who graduated from Carnegie Mellon University, will be studying abroad in Jerusalem on a Fulbright Scholarship. Jody will be taking a gap year as she prepares for medical school and Deaven will work at Pitt. Lastly, former Kline trainee, and more recent Bondi trainee and technician, Darik O’Neil will be attending graduate school at Columbia University.