Henry Alexander Named the Inaugural Recipient of the S. William Stezoski Award for Technician Excellence at the Safar Center for Resuscitation Research 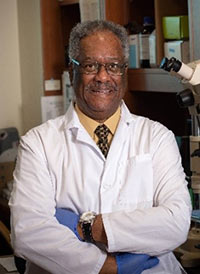 Based on an incredible career that has included over 50 years of outstanding service as a technician at the Safar Center, Henry Alexander was selected unanimously by the Associate Directors of the Center to be the inaugural recipient of the S. William Stezoski Award for Technician Excellence. Henry began his career at the University of Pittsburgh in 1969 hired as part of a student program remarkably out of Fifth Avenue High School in the Pittsburgh Public Schools to work in the laboratory of the legendary Professor and CPR pioneer the late Dr. Peter Safar. Henry embraced that opportunity and steadily rose to his current position as a Sr. Staff Technician. Henry has assisted countless investigators, trainees, and technicians through his exceptional surgical skills with pre-clinical modeling of cardiac arrest and traumatic brain injury. He published 30 manuscripts as a co-author, with his first publication in 1984. On 15 of those papers, he was a co-author with Dr. Safar. His contributions to recent and current work include three publications in the 2019, and eight in the past five years.

Dr. Mioara Manole, who has worked with Henry for 14 years stated “Henry is someone who has worked tirelessly to advance our knowledge of pathophysiology and neuroprotection after cardiac arrest and traumatic brain injury. He helped launch the careers of countless faculty at Pitt who became leaders in resuscitation world-wide.” As one of the many scientists whose careers were positively impacted by Henry, Dr. Manole stated “There is no research technique too challenging for Henry and his calm, humble demeanor, wise advice, and rich life experience have also taught those of us fortunate enough to work with him to be better persons.” Henry will be retiring on September 30, 2020. A hearty congratulations to Henry for this outstanding accomplishment.